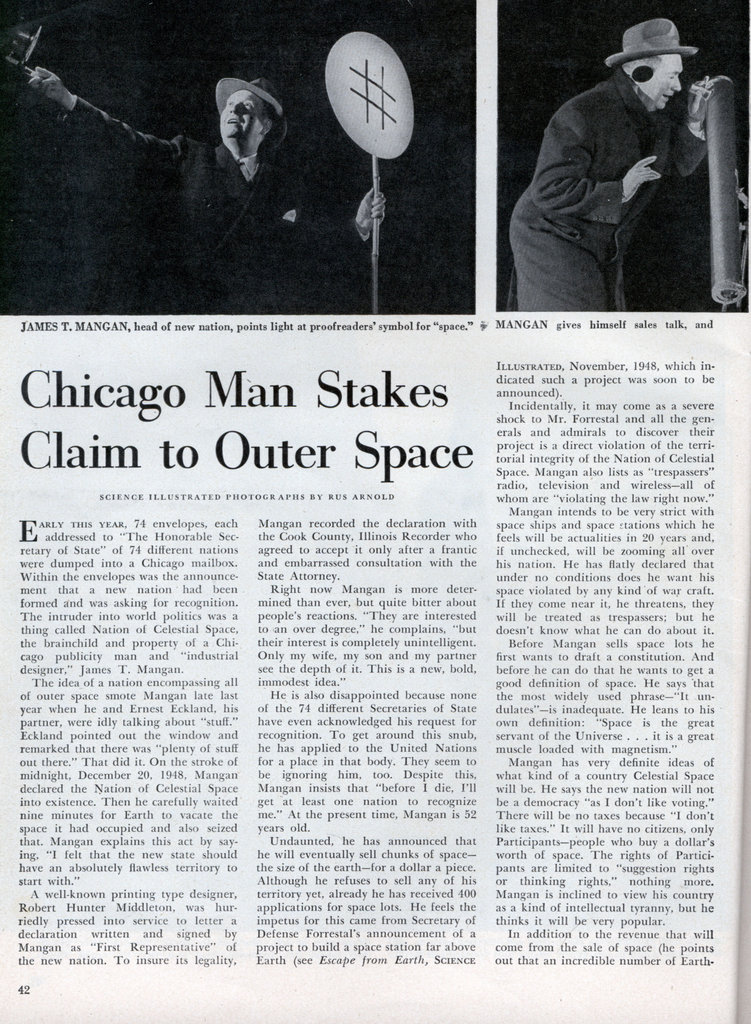 Early this year, 74 envelopes, each addressed to “The Honorable Secretary of State” of 74 different nations were dumped into a Chicago mailbox. Within the envelopes was the announcement that a new nation had been formed and was asking lor recognition. The intruder into world politics was a thing called Nation of Celestial Space, the brainchild and property of a Chicago publicity man and “industrial designer,” James T. Mangan.

The idea of a nation encompassing all of outer space smote Mangan late last year when he and Ernest Eckland, his partner, were idly talking about “stuff.” Eckland pointed out the window and remarked that there was “plenty of stuff out there.” That did it. On the stroke of midnight, December 20, 1948, Mangan declared the Nation of Celestial Space into existence. Then he carefully waited nine minutes for Earth to vacate the space it had occupied and also seized that. Mangan explains this act by saying, “I felt that the new state should have an absolutely flawless territory to start with.”

A well-known printing type designer, Robert Hunter Middleton, was hurriedly pressed into service to letter a declaration written and signed by Mangan as “First Representative” of the new nation. To insure its legality, Mangan recorded the declaration with the Cook County, Illinois Recorder who agreed to accept it only after a frantic and embarrassed consultation with the State Attorney.

Right now Mangan is more determined than ever, but quite bitter about people’s reactions. “They are interested to an over degree,” he complains, “but their interest is completely unintelligent. Only my wife, my son and my partner see the depth of it. This is a new, bold, immodest idea.”

He is also disappointed because none of the 74 different Secretaries of State have even acknowledged his request for recognition. To get around this snub, he has applied to the United Nations for a place in that body. They seem to be ignoring him, too. Despite this, Mangan insists that “before I die, I’ll get at least one nation to recognize me.” At the present time, Mangan is 52 years old.

Undaunted, he has announced that he will eventually sell chunks of spaceâ€” the size of the earthâ€”for a dollar a piece. Although he refuses to sell any of his territory yet, already he has received 400 applications for space lots. He feels the impetus for this came from Secretary of Defense Forrestal’s announcement of a project to build a space station far above Earth (see Escape from Earth, Science Illustrated, November, 1948, which indicated such a project was soon to be announced).

Incidentally, it may come as a severe shock to Mr. Forrestal and all the generals and admirals to discover their project is a direct violation of the territorial integrity of the Nation of Celestial Space. Mangan also lists as “trespassers” radio, television and wirelessâ€”all of whom are “violating the law right now.”

Mangan intends to be very strict with space ships and space stations which he feels will be actualities in 20 years and, if unchecked, will be zooming all over his nation. He has flatly declared that under no conditions does he want his space violated by any kind of war craft. If they come near it, he threatens, they will be treated as trespassers; but he doesn’t know what he can do about it.

Before Mangan sells space lots he first wants to draft a constitution. And before he can do that he wants to get a good definition of space. He says that the most widely used phraseâ€””It undulates”â€”is inadequate. He leans to his own definition: “Space is the great servant of the Universe . . . it is a great muscle loaded with magnetism.”

Mangan has very definite ideas of what kind of a country Celestial Space will be. He says the new nation will not be a democracy “as I don’t like voting.” There will be no taxes because “I don’t like taxes.” It will have no citizens, only Participantsâ€”people who buy a dollar’s worth of space. The rights of Participants are limited to “suggestion rights or thinking rights,” nothing more. Mangan is inclined to view his country as a kind of intellectual tyranny, but he thinks it will be very popular.

In addition to the revenue that will come from the sale of space (he points out that an incredible number of Earth- 42 size chunks can be carved out of his domain), Mangan is toying with the idea of issuing stamps and selling them to collectors. He is influenced in this by the example of Lichtenstein, a small country in Europe that derives a large part of its national income from the sale of the incredible number of stamps it puts out. Mangan is now trying to persuade some small U.S. town to change its name to Celestia and act as headquarters and post office for the nation.

An obstacle to Mangan’s claim to all outer space may come from land owners who may feel that they own the land below them and the air above. That concept has been breached time and again by airlines and the Civil Aeronautics Authority who feel that the air is free.

But even if people’s property rights extend straight up and down, Mangan believes it is not too important. He points out that space is curved and once you leave the limits of the earth, the distance between the boundary lines grows more and more huge. The concept of owning property upward and downward, Mangan says, “is the biggest oversight in history.”

Mangan also believes that Celestial Space will serve as a bulwark of international peace. “Look at it philosophically,” he says. “If you owned something 8,000 miles in diameter and 25,000 miles in circumference, you might realize that war is something to be laughed at. My nation might even give people enough bigness of thinking, enough bigness of disdain to make them feel international squabbles are petty.”

To make sure his nation doesn’t go astray, Mangan is about to change his will and leave all his property rights to his children. He is sure they will carry on the struggle after he leaves this planet forever.